A digital project, edited with Michael Aronna (Vassar College) dedicated to Gonzalo Fernández de Oviedo’s Historia General de las Indias, which will include an annotated version of its fifty books in the original Spanish, and a full translation into English of the complete text (the first ever) as well as critical and interpretative material. The project is part of a collaborative project with Vassar College students as translators.

Gonzalo Fernández de Oviedo (1478–1557) was one of the most important early chroniclers of the Spanish conquest of the Americas. The Historia general y natural de las Indias (General and natural history of the Indies) was his most important work. The 19 books of the first part of the history were published in Seville in 1535 and the first book of the second part, in 1552, but the complete work was not published until 1851–55 by the Spanish Academy of History. Oviedo, in addition to his gifts as a historian, was an important ethnologist and naturalist. He played, according to the Library of Congress, a “key role in the history of American science, especially biology, as he was the first to study and describe, with great accuracy, many species of animals and plants.” 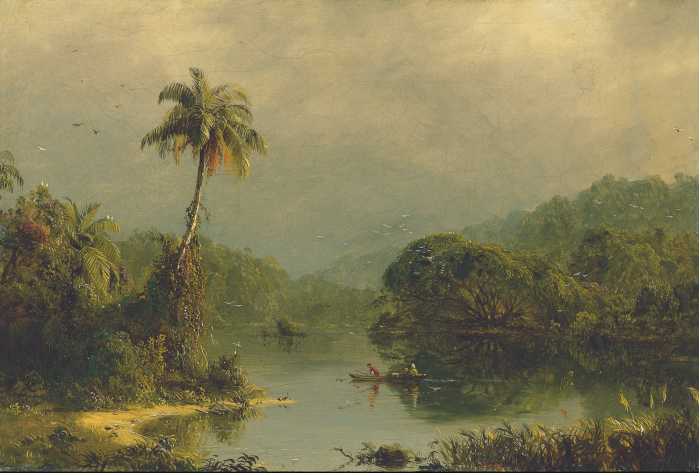 A collection of multidisciplinary essays examining the work of Hudson River painter Frederic Church from a Latin American perspective. Previous scholarship on Church in Latin America has generally sought to shed light on the impact of Church’s voyages on his development as a painter and on the representation of Latin America in the United States’ imaginary.

We are focusing instead on neglected aspects of the study of Church in Latin America, Mexico, and the Caribbean, and welcome proposals on all aspects of Church’s sojourns in South American and his regional legacy—from unexamined sketches and paintings, the Magdalena River diaries, correspondence, and travels within Ecuador, Colombia, Mexico, and the Caribbean to the impact of his work on local painters (Rafael Troya, José María Velasco, Luis Alfredo Martínez, and others). We especially invite contributions examining Church’s engagement with/impact on the development of 19th-century Latin American art.

FOR AN ISLAND: THE COLLECTED POEMS OF PHYLLIS SHAND ALLFREY

Edition of the poems of Dominican writer , newspaper editor and politician Phyllis Shand Allfrey. The volume includes the four collections published during her lifetime–Contrasts, In Circles, Palm and Oak and Palm and Oak II–, all the unpublished poems founds among her papers, and a sample of the satirical poems she published in the newspaper The Star under the pseudonym of Rose-O.
Allfrey, founder of Dominica’s first political party–the Dominican Labour Party–was Minister or Labour and Social Affairs during the short-lived Federation of the West Indies. In addition to her poetry, she wrote short stories (many of them in a volume entitled It Falls Into Place) and was the author of two novels, the West Indian classic The Orchid House and the unfinished In the Cabinet.
She died in Dominica in 1986.

DISPLACEMENTS AND TRANSFORMATIONS IN CARIBBEAN LITERATURE AND CULTURE

The geopolitical contours of the Caribbean have changed over the centuries. Amerindian chiefdoms gave way to European colonies that have been replaced by nations of various political flavors. Connections between islands and countries vary almost as much as the languages spoken in the region. As people, cultures, and ideologies have collided over the centuries, the difficulty of describing the region has become ever more complex. Displacements and Transformations in Caribbean Cultures brings together some of the top scholars working on the Caribbean in a wide range of fields. They address a variety of subjects, from the colonial slave trade to the discourse of AIDS in the twenty-first century, from Haitian art of the Botpippel to U.S. imperialist fiction of Cuba. Covering all parts of the region and most linguistic groups, the essays demonstrate that the Caribbean as a multicultural geographic area defies simple classification. Contributors include Peter Hulme, Yolanda Martínez San Miguel, Jalil Sued Badillo, Kevin Meehan, Michael Aronna, and Antonio Benítez Rojo.
“A most stimulating project that presents a critical and unique approach to Caribbean geographies. The variety and scope of the volume is intellectually challenging and refreshing to scholars, yet it is a collection that is accessible to a very wide audience.” JOSÉ F. BUSCAGLIA-SALGADO

IT FALLS INTO PLACE: SHORT STORIES BY PHYLLIS SHAND ALLFREY

It Falls into Place brings together for the first time the shorter fiction of Phyllis Shand Allfrey, whose novel The Orchid House is a classic of Caribbean literature. These tantalizing stories—set in Dominica, New York and London yet always steeped in an unmistakably West Indian identity—probe beneath the surface of colonial life, often drawing on autobiographical experience. Allfrey’s skill is to lead her characters—of different races and cultures—into unpredictable encounters where miracles can happen. The book was selected as one of the “Notable Books of 2004” by the Times Literary Supplement (London).
“The freshness and quirkiness of Allfrey’s gaze into aspects of colonial life can only delight the reader. She is a West Indian writer startled by the landscape of her imagining and in love with her characters. Allfrey the artist and Allfrey the activist merge in this memorable collection of stories.” DAVID DABYDEEN
“Her delicate touch, discerning eye and a heart wise to the human condition animate these stories. It Falls into Place will confirm Allfrey’s major contribution fo the development of West Indian literature and enchant new readers everywhere.” OLIVE SENIOR 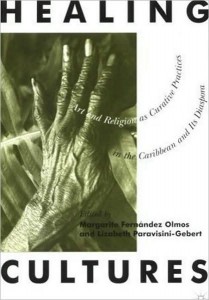 HEALING CULTURES: ART AND RELIGION AS CURATIVE PRACTICES IN THE CARIBBEAN

The Spanish expression–la cultura cura (culture heals)–is an affirmation of the potential healing power of a variety of cultural practices that together constitute the ethos of a people. What happens, however, when cultures themselves are in jeopardy? What are the “antidotes” or healing modalities for an ailing culture? Healing Cultures addresses these questions from a variety of disciplines–anthropology, holistic folk traditions, literature, film, cultural and religious studies–bringing together the broad range of beliefs and the spectrum of practices that have sustained the peoples and cultures of the Caribbean. Contributors include Brian M. Du Toit, Karen McCarthy Brown, Ester Shapiro Rok, Anna Wexler, Opal Palmer Adisa, and Mayra Montero, among others.
“This blend of historical overviews, personal testimonies, and portrayals of struggles, losses and victories through the various media provide new pathways for exploring cultures and their healing systems.” THE AMERICAS

WOMEN AT SEA: TRAVEL WRITING AND THE MARGINS OF CARIBBEAN DISCOURSE

This collection of essays offers a contestatory discourse that embraces the forms of travelogue, autobiography, and ethnographic accounts as vehicles for women’s rewriting of “flawed” or incomplete accounts of Caribbean cultures and societies. Contributors include José Piedra, Joan Dayan, Luisa Campuzano, and Richard Frohock, among others.
“Productively disruptive, this book could be one of the most useful pebbles ever to be flung into the pool of maritime historiography.” INTERNATIONAL JOURNAL OF MARITIME HISTORY

“Women at Sea provides a vibrant critical analysis of competing discourses on Caribbean culture in travel writing. Essays show how social landscapes are gendered battlegrounds between nationalism and cultural colonization, patriarchy and female independence. Editors Lizabeth Paravisini-Gebert and Ivette Romero skillfully weave multiple Caribbean exchanges on hybridity, gender-bending, race, autobiography and ideology in the construction of historical narratives. Without a doubt, it is a seminal work in Caribbean literary criticism.” CHOICE 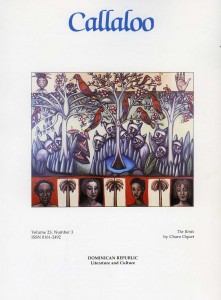 THE DOMINICAN REPUBLIC: LITERATURE AND CULTURE 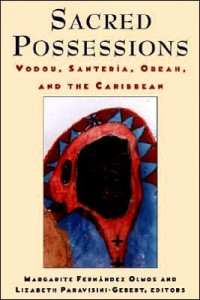 Sacred Possessions is an unprecedented collection of thirteen comparative and interdisciplinary essays exploring the cross-cultural dynamics of African-based religious systems in the Caribbean. The contributors analyze the nature and liturgies of Vodou, Santeria, Obeah, Quimbois, and Gaga as they form one central cultural matrix in the region. They ask how these belief systems were affected by differing colonial histories and landscapes, how they affected other cultural expressions (from the oral tradition to popular art and literature), and how they have been perceived and (mis)represented by the West. The book is a unique contribution to the study of the Caribbean as a site of mutliculturalism, demonstrating the linkages between anthropology, religion, literature, and popular culture. Contributors include Joan Dayan, Anna Wexler, José Piedra, Brinda Mehta, Alan Richardson, and Miguel Barnet.
“A marvelous example of African Diaspora Studies . . . challenges our usual scholarly and everyday articulations of religion, even as it clearly articulates the possibilities and limits of Caribbean African retentions in Vodou, Santeria, and Obeah.” BARBARA CHRISTIAN

First published in 1954, The Orchid House, Phyllis Shand Allfrey’s only published novel, is a classic of Caribbean literature. In this markedly autobiographical story of the three daughters of a once-powerful but now impoverished white family, Allfrey interweaves her family’s history with the history of her home island of Dominica in the twentieth century. The novel is written in a sensuous style and the story remarkably told through the eyes of Lally, the black nurse of the three sisters. Often praised for the clearsightedness of its analysis of the Dominican historical process, The Orchid House stands at a crucial intersection of West Indian politics. It was during this period that the colonized took over from the colonizer the direction of local governments. Allfrey, a Fabian socialist and founder of Dominica’s first political party, articulates in this novel the central tenet of a political philosophy that guided a lifetime of grassroots activism: that profound changes had to take place in the power structures of Caribbean societies to bring social justice to its peoples, and that those who persevered in seeking to revive the past were doomed.

With Olga Torres-Seda. Westport, Conn.: Greenwood Press, 1993. 427pp.
This comprehensive, annotated bibliography of works by and about Caribbean women novelists from 1950 to the present covers writings in English, Spanish, French, Dutch, and their dialects. Entries on some 150 individual writers are organized alphabetically and comprise a biographical sketch, data on novels with plot synopses, a listing of other known publications in all genres, as well as annotated criticism and reviews. Included are translations, interviews, recorded materials, and broadcast literature.
“The challenge of the compilers of Caribbean Women Novelists was to produce a comprehensive and up-to-date resource on its subject, encompassing the diversity of languages and traditions, in order ‘to provide a useful tool for the comparative study of women’s literature.’ They have succeeded with this comprehensive critical bibliographic study. In large public libraries and in academic institutions, this resource will help fill an information void.” REFERENCE BOOKS BULLETIN 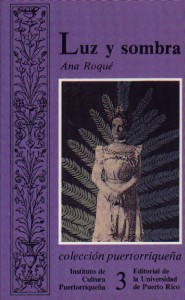 A much-reprinted critical edition of the 1903 novel by one of our suffragist leaders. The novel, which had disappeared from the Puerto Rican literary canon until this edition came out in 1991, is now recognized as a classic of feminist fiction in the island. The edition includes my critical introduction, notes, and biographical sketch of the author and a bibliography by my late and much missed collaborator Olga Torres-Seda.
Loading Comments...